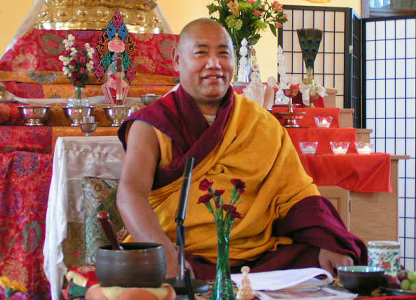 Khenchen Rinpoche was born in the village of Tsari in southwestern Tibet in 1946. Tsari is an important pilgrimage site in Tibet, being the sacred place of the enlightened-mind of Vajravarahi and Rinpoche lived there until 1959 when his family was forced to flee to India due to the political unrest of the time. While in India, Rinpoche attended school and eventually took the complete monk's vows from Kyabje Kalu Rinpoche in 1968.

He was among the first batch of students to graduate from the then newly established Central Institute of Higher Tibetan Studies in Varanasi. Among the great teachers Rinpoché received extended teachings from were the 16th Karmapa and Khunu Lama Rinpoché. Subsequently, Rinpoché entered into the traditional 3-year retreat with a group of young Drikung Kagyu lamas (including His Holiness Drikung Kyabgön Chetsang Rinpoché) under the guidance of Vajradhara Kyungka Rinpoche.

In the 1980s, Rinpoché arrived in the US and spent the next twenty years building and supporting the TMC and other centers and groups in the US. During these years, Khenchen Rinpoché translated critical Drikung Kagyu practices, prayers and histories into English and publishing several highly regarded books such as the translation of Jewel Ornament of Liberation, Garland of Mahamudra Practices and Jewel Treasury of Advice. This priceless work formed the essential base from which the holy Dharma could be taught and practiced.

In recent years, Khenchen Rinpoché spends a great deal of his time traveling in order teach the Dharma, dividing his time between teaching at traditional Tibetan monasteries in India, Nepal and Tibet and at centers in Taiwan, Southeast Asia, Europe and the US.

The Chicago Ratna Shri Sangha was founded under the auspices of His Holiness Drikung Kyabgon Chetsand Rinpoche in 1994 by the Venerable Khenchen Konchog Gyaltsen Rinpoche. Follow him on facebook