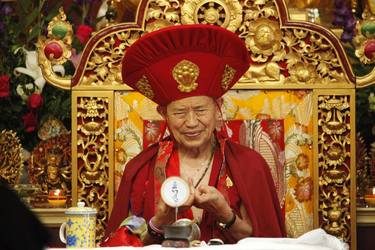 Sunday 10 am - 5 pm:
White Tara Empowerment and Refuge for those that would like to take Buddhist Refuge Vows with Garchen Rinpoche.

We've secured a block of rooms at the Edward Hotel for Garchen Rinpoche's visit for Friday and Saturday night, May 25th & May 26th for $89/night excluding taxes . To make reservations call 847-544-7500

Biography:
Garchen Rinpoche was born in 1936 in Nangchen, Kham in eastern Tibet. When Garchen Rinpoche was seven years old he was brought to Lho Miyal Monastery after he was recognized by the former Drikung Kyabgon Zhiwe Lodro where he was instructed by Siddha Chime Dorje.

When he was 22 he was imprisoned by the Chinese for 20 years and put in a labor camp during the Chinese Cultural Revolution. During that time he met with Khenpo Munsel who became his root guru. Khenpo Munsel was a Nyingma master who taught him during the whole 20 years of his imprisonment. During that time, while enduring the labor camp hardships, Garchen Rinpoche kept on practicing in secret, according to his guru's instructions until he achieved the wisdom-mind which Khenpo Musel called "an emanation of a Bodhisattva".

Garchen Rinpoche was released from prison in 1979. As soon as he was released, he took it upon himself to rebuild the Drikung Kagyu monasteries, reestablish the Buddhist teachings, and build two boarding schools for local children in eastern Tibet.

Garchen Rinpoche first came to North America in 1997, teaching in Canada and the United States.
Current activities and expertise

Rinpoche is a master of dzogchen, the fivefold practice Mahamudra, the Six Yogas of Naropa, and the preliminary practices (Tib. ngöndro). He widely promotes Thogme Zangpo's Thirty-Seven Practices of a Bodhisattva and White Tara practice.

"My Dharma friends please take this to heart and make it a priority to attend this exceptionally rare and precious event." -Venerable Drupon Rinchen Dorjee
Powered by