It is so wonderful that you have met with the dharma and we welcome you to our center. We want to provide an environment at Chicago Ratna Shri that is open to all who seek a deeper, truer, more significant experience of life—from the general public to Buddhist practitioners.

Our goal is to provide support and offer a range of activities with broad appeal, accommodating participation at every level. For those who seek guidance on the Buddhist path, we will provide it. For those with a secular interest in meditation and wellness, we will share our knowledge.

We also understand that when you begin it can sometimes feel like there is so much to learn. In fact, many of us remember what it was like to first walk into the center filled with a thirst to learn more about Buddhism but not certain where to even begin, as it can feel so vast. You can choose from meditation classes and meditation practice sessions, traditional Buddhist teachings, book discussions on Buddhist philosophy, and more. We are here for you whatever your level of interest.
What is the drikung kagyu?
Drikung Kagyu or Drigung Kagyu (Wylie: 'bri-gung bka'-brgyud) is one of the eight "minor" lineages of the Kagyu school of Tibetan Buddhism. "Major" here refers to those Kagyu lineages founded by the immediate disciples of Gampopa (1079-1153) while "minor" refers to all the lineages founded by disciples of Phagmo Drupa (1110-1170), the main disciple of Gampopa. The founder of the Drikung Kagyu lineage was Jigten Sumgön (1143-1217) of the Kyura clan,[1] who was the disciple of Phagmo Drupa. According to historical account from the time, Jigten Sumgön's teachings attracted more than 100,000 people at a time, with the highest number of attendance recorded at 130,000.[2]
Who is lord jigten sumgön?
Jigten Sumgön (1143-1217), was the founder of the Drikung Kagyu lineage[1] and main disciple of Phakmo Drüpa.[2] He founded Drikung Thil Monastery in 1179.[3]
Jigten Gonpo and the Drikung lineage are best known for the set of teachings known as The Five Profound Paths of Mahāmudrā (phyag chen lnga ldan). Some of Jigten Sumgön's sayings were collected by Sherab Jungne into what is known as "Gongchik - The Single Intention" (dgongs gcig),[4] a profound philosophical compendium that further developed in commentarial works written in the following generation.[5] Some of Jigten Gonpo's teachings were collected by another disciple into what is known as the Heart of the Great Vehicle's Teachings (theg chen bstan pa'i snying po).[6] 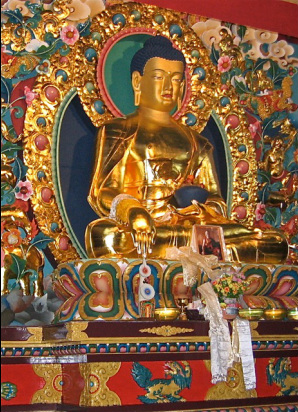 Lord Buddha Shakyamuni
WHAT IS BUDDHISM?
Buddhism is the teachings of Siddhartha Gautama, who was born into a royal family in northern India around 2500 years ago.  He realized that wealth and luxury did not guarantee happiness so he explored the different teachings, religions and philosophies of the day to find the key to happiness.  After many years of study and meditation he finally found 'the middle path' and became enlightened.  After enlightenment he taught what he learned until his death at the age of 80.

WAS THE BUDDHA A GOD?
He was not, nor did he claim to be.  He was a man who taught a path to enlightenment from his own experience.

IS BUDDHISM A RELIGION?
To many, Buddhism goes beyond religion and is more of a philosophy or 'way of life'.

DO BUDDHISTS WORSHIP IDOLS?
Buddhists sometimes pay respect to images of the Buddha.  A statue of the Buddha with hands rested gently in it's lap and a compassionate smile reminds us to strive to develop peace and love within ourselves.  Bowing to the statue is an expression of gratitude for the teaching.

ARE THERE DIFFERENT TYPES OF BUDDHISM?
There are many different types of Buddhism, because the emphasis changes from country to country due to customs and cultures.  What does not vary is the essence of the teaching.

WHAT DOES BUDDHISM SAY ABOUT OTHER RELIGIONS?
Buddhism is a belief system which is tolerant of all other beliefs and religions.  Buddhism agrees with the moral teachings of other religions, no matter the name it goes by.

HOW CAN BUDDHISM HELP ME?
Buddhism explains a purpose to life, it explains apparent injustice and inequality around the world, and it provides a code of practice or way of life that leads to true happiness.
Powered by